Psoriasis is a chronic, immune-mediated inflammatory disease that affects up to 3% of the population worldwide. Psoriasis traditionally comprises both erythrosquamous and pustular lesions. These are distinct both clinically and histologically, but both pustules and plaques can occur together. For example, pustules can be observed as an extreme phenotype within plaques of psoriasis. Indeed, plaques always have a measure of neutrophil granulocytes that can be detected histologically. When intense inflammation is present, collections of neutrophils (Munro’s subcorneal microabscesses and Kogoj’s spongiform pustules) can form. It has not formally been proven whether these can turn into clinically observable pustules. But it is a not uncommon clinical observation to find some pustules in inflammatory plaques of PV (particularly by dermoscopy), as was described also by Barber and Königsbeck. This ultimately led to the assumption that several primary pustular conditions are part of the psoriasis spectrum, which were thus labelled pustular psoriasis (PP). Newer data have revealed that some of the genetic variants underlying PP do not occur in non-pustular psoriasis. Therefore, the question arose whether these conditions should be regarded as diseases altogether separate from psoriasis. This prompted several groups to investigate these conditions closely for pathogenetic factors involved.

Unfortunately, the rarity of PP does not usually allow collection of sufficient sample numbers from a single centre. Therefore, pooling of samples among international centres is crucial. This was made more difficult than might be expected, because the clinical criteria for description and diagnosis of pustular conditions including PP varied and no consensus had been developed. Pooling heterogenous international groups of patients with non-matching criteria also makes genetic discovery more difficult. Hence, we set out in 2012 to create a network that would allow a European consensus for clinical criteria of PP. This project was named the European Rare and Severe Psoriasis Expert Network (ERASPEN). It allowed clinicians to include patient information in a static registry that was based on a one-time clinical characterization of PP patients in Europe, which started an unbiased collaborative investigation of the clinical phenotype and genotype of PP patients.

A review of the definitions of PP in standard dermatology textbooks showed several discrepancies on subtypes, localizations, pain, presence of arthritis and other features.

This prompts to review the first descriptions of PP, which revealed that the current understanding of these conditions has drifted somewhat away from these first observations. 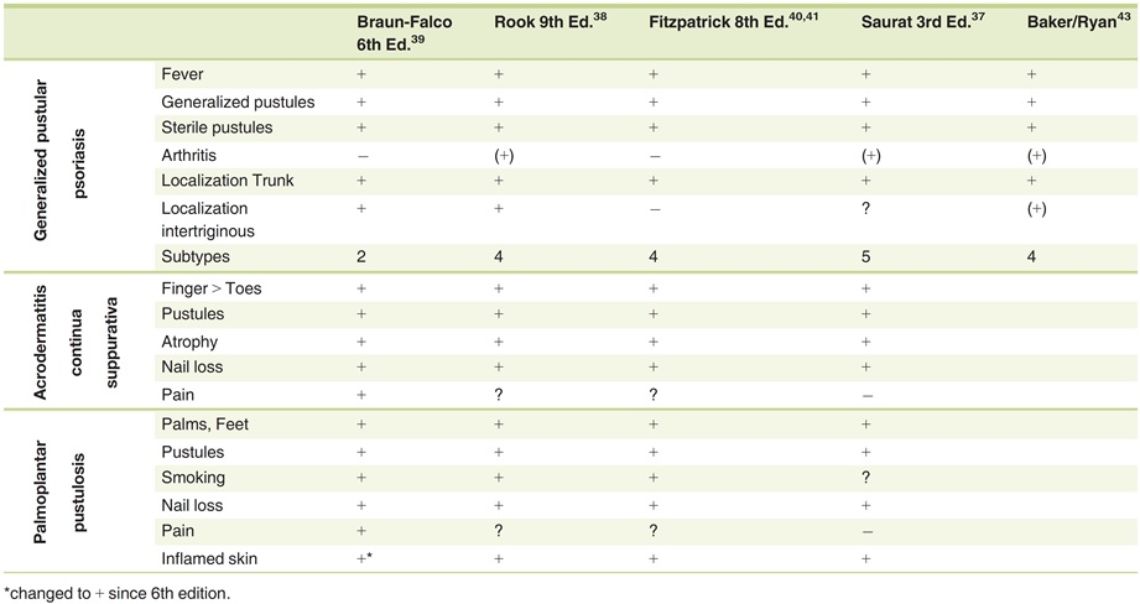 Subsequently, they developed recurrent episodes of bright erythema and oedema, which then became studded with multiple pustules (Figure 1a).

Figure 1: Generalized pustular psoriasis (a), Acrodermatitis continua of Hallopeau (b), Palmoplantar pustulosis (c) and an unclear case of a single episode of a sterile, localized pustular eruption that would be classified as undifferentiated pustulosis (d).

The flares were almost universal and constantly accompanied by fever (40°C) and other signs of systemic inflammation. Each attack was short lived, the inflamed skin becoming paler as the pustules gave way to peeling and desquamation. Even though the first attacks were temporally associated with the pyrogallic acid treatments, subsequently they re-occurred without obvious causes. The eruptions paralleled the activity of psoriasis. In a period of 10 years, 9 flares occurred. Subsequent descriptions of GPP featured many patients without PV. Also, trigger factors for GPP other than pyrogallic acid were identified, namely infections, pregnancy, hypocalcaemia associated with hypoparathyroidism, and drugs. Especially streptococcal infection has been noted as a provocative factor. Some of these triggers have prompted the definition of distinct conditions (see below).

Acrodermatitis continua of Hallopeau (ACH) was described in 1890 in a 69 year old glove maker, shortly after Radcliffe-Crocker had described similar cases in 1888. Since infancy, the patient had suffered repeatedly with peripheral hypoxia. Hallopeau interpreted the condition as Raynaud’s phenomenon. The toes, ears and nose were also affected from time to time upon exposure to cold. The patient suddenly developed a red and painful lesion on the palm, as well as purulent inflammation of the same fingers that had been affected by the cyanosis. This inflammation started at the matrix of the nails. Months after the first presentation, the patient’s toe nail turned red and whitish islets with polycyclic borders developed on the nail, representing subungual pus. Subsequently, the patient lost several toenails and the periungual tissues were greatly inflamed. The disease then spread to involve the whole body with sheets of pustules that only abated after a period of 6 months. The oral mucosa was involved as well. Interestingly, during a period of influenza and pulmonary congestion, the pustules resolved briefly. Hallopeau interpreted his observation that pustular lesions were causally connected to the hyperaemia that he had observed after the attacks of Raynauds’ phenomenon and he suggested in his case discussion that this might have led to the inflammation. Other authors’ later descriptions did not include a vascular component but rather seemingly spontaneous neutrophil inflammation of the distal fingers (Figure 1b) and toes. Barber stated “true acrodermatitis continua vel perstans begins on the extremity of a digit, either as an infected traumatic sore, or as a whitlow. From this localized and unilateral site the eruption spreads”. Also, in some patients ACH tends to generalize and overlap with GPP.

Palmoplantar pustulosis (PPP) is the most common of the three archetypical forms of PP. Barber at St John’s Institute of Dermatology in London described a series of patients in great detail. He observed that PV is often associated with PPP and can precede it. The age of onset varied from of 7 to 74 years and a familial association was often present. Sometimes, pustules developed within psoriatic plaques (a phenomenon we nowadays call “psoriasis cum pustulatione”, or ‘psoriasis with pustules’). Pustules developed also on the lateral surfaces of the hands and feet, on the wrists, over the Achilles tendons, and upwards around the ankles. He observed that the neutrophilic infiltration destroys the microarchitecture of the epidermis and that upon evacuation of the pus, the pustules in PPP leave a visible cavity behind. When they are not evacuated, the pustules dry up and form brownish scabs (Figure 1c) that subsequently exfoliate. Barber also noted that sometimes, the fluid is at first serous and not pustular. Invariably, the pus was sterile. He was convinced that PPP is a pustular form of psoriasis and as evidence cited the co-incidence of the two conditions, mixed lesions with features of both conditions, familial occurrence and onset triggered by streptococcal infection. Later it was substantiated that tonsillectomy is a beneficial measure in PPP. On the other hand, he strictly set ACH apart from GPP / PPP.

Uncommon forms of PP exist that partially overlap with GPP, ACH or PPP.

The drug-triggered acute generalized exanthematous pustulosis (AGEP) is clinically very similar to GPP, and recently the same mutations in IL36RN were found in some cases of AGEP. Pustulosis acuta generalisata (PAG) is clinically related to GPP and AGEP. PAG produces scattered subcorneal pustules with red halo on normal skin, with acral predominance. Leukocytosis and sometimes leukocytoclastic vasculitis and fever are present. The anti-streptolysin titers are elevated. Impetigo herpetiformis (IH) was described in 1872 by von Hebra and is a generalized pustular eruption anytime during pregnancy. It remits post-partum. Some cases have been found to have IL36RN mutations 4, suggesting that IH and GPP are the same disease.

The pustular bacterid that was identified by Andrews and Machacek is also triggered by streptococcal infection, usually of the throat. It is exquisitely rare but continues to be described every few years. It affects the palms and soles with multiple tense monomorphic pustules without erythema or scale and occurs together with systemic symptoms including fever. The sudden onset, the invariable association with streptococcal infection and the fever sets it apart from palmoplantar pustulosis. A condition that is almost forgotten today is Radcliffe-Crocker’s dermatitis repens that he described in 1888 in three patients. He noted a slowly progressing erosive dermatitis on the fingers that he thought to be elicited by injury. This condition, comparably to ACH, affected first the nail apparatus and indeed led to loss of fingernails, but never became generalized. Barber, in a detailed and painstaking comparison, concluded that this condition is identical with ACH.

There are many other pustuloses not associated with psoriasis. Pustules can develop as a response to bacterial, viral or fungal infection, but they can also form without apparent cause and remain sterile (Figure 1d). The latter are the central feature observed in primary pustuloses. At least 29 different primary pustuloses have been described over the years, and all three PP types can be classified in this list as well. These conditions can involve all areas of the skin, have been described in all age groups and have a wide range of possible associated clinical features. The pustuloses comprise a variety of conditions that were thought to merit consideration as separate entities based on a distinct phenotype, specific trigger factors, or for being a part of a complex syndrome’s clinical manifestation. Many of the pustuloses described over the years are exquisitely rare, to the point that their existence has been discussed controversially.

Taken together, it is not surprising that the first descriptions of PP and later observations do not completely overlap. This suggests a clear unmet need for a further investigation of the phenotypes, as well as validation or adaptation of data-driven definitions by prospective evaluation of a sufficient number of PP patients.

The goal of this project is to describe the natural course of disease in different subtypes of PP. The network builds on a static registry that was based on a one-time clinical characterization of PP patients in Europe (ERASPEN), which started an unbiased collaborative investigation of the clinical phenotype and genotype of PP patients. ERASPEN has, in a hypothesis-free approach, newly described the phenotype of PP (3, Mostafa et al. (submitted)).

Hence, the International Rare and Severe Psoriasis Expert Network (IRASPEN) already has multiple clinicians involved who have successfully characterized and included their patients in ERASPEN. IRASPEN addresses the question of temporal evolution of clinical features and is actually a non-interventional prospective study that aims to describe the clinical course and treatment responses of a large number of PP patients over a period of 5 years.

Questionnaires such as the DLQI, EQ-5D, GPP ASI, GPPGA, PPP ASI, photography and lesion count will be used as well as the needed genetic material through blood and skin biopsies. Navarini et al presented initial considerations on the phenotypes of PP and a consensus classification of clinical phenotypes that will be used as a baseline for this registry. The data collection with this registry will give insight on the natural cause of PP disease revealing the burden of disease including frequency and severity of flares and the role of therapeutic interventions.